You are here: Home / Archives for LEGO 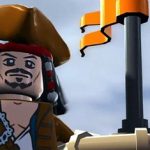 Only a few movie-based games have ever fared well, but the king of them all is the LEGO series, which has gone from a “that’s cute” concept to one of the most widespread movie-franchise reboots of all time. Maybe the LEGO games have become too ubiquitous, but you’ve got to credit TT Games for extending their block-building prowess to every big-time brand around. The latest entry, LEGO Pirates of the Caribbean, is timed perfectly for Pirates of the Caribbean: On Stranger Tides, and as in all previous LEGO games, its … END_OF_DOCUMENT_TOKEN_TO_BE_REPLACED

The interactive adventures in Hogwarts will expand this holiday season, as Warner Bros. Interactive announced that LEGO Harry Potter: Years 5-7 is in development for all three consoles and handheld, including the Sony NGP and Nintendo 3DS. The game is based on the last three Harry Potter books and final four films. LEGO Harry Potter: Years 5-7 takes players through Harry Potter’s heroic adventures in both the Muggle and wizarding worlds. From Privet Drive in Little Whinging to Diagon Alley, Hogsmeade and Hogwarts -- … END_OF_DOCUMENT_TOKEN_TO_BE_REPLACED