You are here: Home / Archives for LucasArts 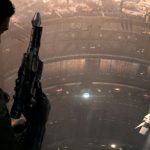 We booked an E3 appointment with LucasArts before knowing what they were going to show. Today, LucasArts shared what we'll be seeing, and it sounds awesome. The game: Star Wars 1313, an all-new title with a much more mature theme than any previous Star Wars game, and one that focuses not on heroes and Jedi, but on the seedy criminal underworld in the Star Wars universe. As players take control of a lethal bounty hunter in a never-before-seen dark and mature world, Star Wars 1313 introduces an integrated development … END_OF_DOCUMENT_TOKEN_TO_BE_REPLACED 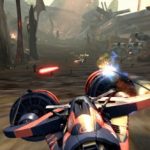 I've gone on record before as stating I didn't initially have high hopes for Kinect Star Wars, although my expectations rose after getting hands-on with the game again at CES 2012. The final Xbox Kinect-exclusive game has ended up somewhere in between: much better than I'd originally anticipated, but not as outstanding as my hands-on time at CES had allowed my mind to wander. There are plenty of good nuggets in the first Star Wars-themed game for Kinect, highlighted by the game's tongue-in-cheek humor in certain modes, … END_OF_DOCUMENT_TOKEN_TO_BE_REPLACED

There are a few parallels between Kinect Star Wars and Episode I: The Phantom Menace, which opens today in 3D. The most obvious is the connection to Episode I content and characters, which so far have driven all of the Kinect Star Wars game demos. The most surprising parallel, though, relates specifically to the 3D release of The Phantom Menace: a poor first impression. The 3D film's first 10 to 15 minutes are frankly a visual disappointment. Sitting through the opening scenes of the Episode I 3D midnight showing, I … END_OF_DOCUMENT_TOKEN_TO_BE_REPLACED

Star Wars: Episode I is releasing theatrically in 3D this week, and it turns out the Kinect Star Wars release date isn't that far behind. Well, in the geologic sense. LucasArts and Microsoft today announced that Kinect Star Wars will ship for Xbox 360 on April 3. And yes, it will be playable in 3D. We've played it for ourselves that way, and it rocks. Along with the Kinect Star Wars game, a limited-edition Xbox 360 “Kinect Star Wars” console bundle will also be available on April 3 for $449.99 USD. The Xbox 360 … END_OF_DOCUMENT_TOKEN_TO_BE_REPLACED

If you can't wait to start Force-pushing your way through the Star Wars MMO universe, you'll be pleased to know that if you pre-ordered Star Wars: The Old Republic and redeemed your code at this site, your Early Game Access begins today (Dec. 13). The globally acclaimed MMORPG goes live on December 20 in North America and Europe. Starting today at 6:00AM CST, players will be able to access the game in waves, creating a rolling thunder of fans pre-loading and playing the game. The Early Game Access program will help … END_OF_DOCUMENT_TOKEN_TO_BE_REPLACED

LucasArts and EA this morning confirmed the release date for perhaps the most anticipated MMO in years, Star Wars: The Old Republic. The companies also outlined some early-access details for those who pre-order the game. So, when will we all get our hands on BioWare's Star Wars MMO? December 20, 2011, just in time for some long gaming sessions over the holiday break. It will ship in Europe on December 22. You can pre-order it from Amazon using this link: Star Wars: The Old Republic. That's a great way to avoid the … END_OF_DOCUMENT_TOKEN_TO_BE_REPLACED

A long time ago, in a galaxy far, far away, there was the a suave hombre named Billy Dee Williams who brought a sense of class and style to the Star Wars universe. Well, a short time from now, in a game retailer near, near to your home, Williams' character, Lando Calrissian, is going to be featured in LEGO Star Wars III: The Clone Wars, LucasArts announced today. Lando Calrissian, who first appeared in The Empire Strikes Back as the man in charge of Cloud City, ended up being the smoothest man this side of Tatooine … END_OF_DOCUMENT_TOKEN_TO_BE_REPLACED