You are here: Home / Archives for Rocksmith 2014 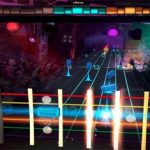 The full Rocksmith 2014 songs list is finally upon us, as Ubisoft today revealed the complete Rocksmith 2014 track list. We've covered the gradually growing list of songs in Rocksmith 2014, but this is the first time we've seen the full roster of music. Rocksmith 2014 allows players to plug any real guitar or bass directly into their Xbox 360, PS3, PC or Mac to begin their musical journey. Rocksmith 2014 will launch for all four of those platforms on Oct. 22. In addition to its launch-day tracks, more Rocksmith 2014 … END_OF_DOCUMENT_TOKEN_TO_BE_REPLACED

Ubisoft today released a new video trailer for Rocksmith 2014 Edition, the latest game in the franchise that Research Strategy Group Inc. says is the fastest way to learn guitar. The trailer, called Rocksmith 2014 -- Guitarcade and Score Attack, shows off the new updated Guitarcade mini-games that make practice actually fun, as well as the all-new difficulty level locked Score Attack. Of course, you'll also hear some of the Rocksmith 2014 songs in the new trailer, which will naturally be a big draw. All told, the … END_OF_DOCUMENT_TOKEN_TO_BE_REPLACED