You are here: Home / Archives for Skill based video games slot machine 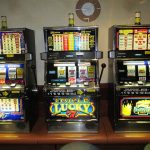 Ever since the world of casinos went online somewhere around the turn of the century, and began to become popular with the same demographic who are into traditional video games, some kind of interaction between the two genres of entertainment has been an inevitability. Now, it’s finally starting to happen, and perhaps in a more formal way than anybody anticipated. At first, you could see the two worlds beginning to collide when betting companies allowed their customers to bet on the outcome of e-sports. As soon as … END_OF_DOCUMENT_TOKEN_TO_BE_REPLACED