You are here: Home / Archives for Survive.io 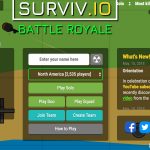 Surviv.io began as a concept for an endless battle game in October of 2017. The start was simple and basic, where players could only play solo rounds with no sound. Ergo, you never heard anyone coming to slaughter your character. However, the game has grown exponentially since then, with patches to add sound, duo or team options, numerous game modes, lots of new weapons and accessories, and a bunch of cool visuals that make the 2D style all the more fun. There’s even a YouTube channel specifically for Surviv.io, … END_OF_DOCUMENT_TOKEN_TO_BE_REPLACED