You are here: Home / Archives for what technology will power the PS5 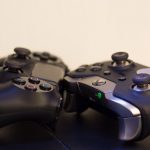 Gaming has seen a new generation of advances, which have immerse players in a new virtual world. It’s a completely new realm out there; online environments as well as Virtual Reality tech have taken gaming and tilted it in its head. PlayStation is the biggest name in gaming consoles, and their evolution is off the charts, with new consoles that have taken previous versions and smashed them out the water. The latest PlayStation 4 Pro was supposed to be the next generation console for gamers, promising 4K gaming. It … END_OF_DOCUMENT_TOKEN_TO_BE_REPLACED