Coming to the PlayStation Store on April 8, The Incredibles Costume Kit will include nine costumes in total, one for each member of The Incredibles family, a “Retro” Mr. Incredible in his blue costume, a Frozone costume, an Edna Mode skin, and a costume for bad guy Syndrome. If you’re not down with the entire costume pack, the individual costumes will also be available for purchase.

The co-marketing is more than just costumes, though: The Incredibles Level Kit will go up for purchase at the same time. This will include a Gallery Level filled with landmarks from The Incredibles, prize bubbles containing all the materials used to make it and a bunch of other collectibles. Stretch and dash your way across the rooftops of the city, investigate the more secret parts of the Parr family home, explore the jungles of Nomanisan Island, where Syndrome’s base is located, before taking a trip on his monorail system into the heart of the base itself. 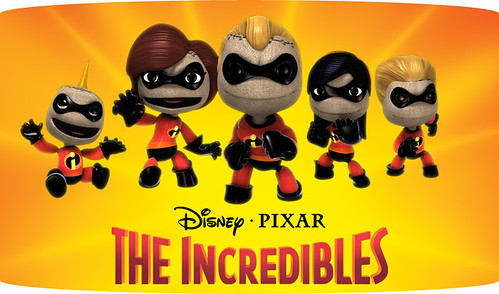 Now, all of this co-marketing begs the question: why The Incredibles, and why now? Two possible answers could be either Disney/Pixar is about to unveil The Incredibles 2, or the companies are set to announce the release of The Incredibles on Blu-ray Disc. Any guesses which it will be?