You are here: Home / Archives for Electronics / Android

Mobile gaming often delves into the world of simple, new games, so when we hear about a classic '80s shooter such as R-Type coming along, we definitely take note. And today, that's just what happened: development studio DotEmu released the emblematic R-Type for Android devices. In R-Type for Android, mobile gamers will pilot the R-9a Arrowhead, the last hope of human race in its war against alien invader. The mission is clear but not so easy: blast off and strike the evil Bydo Empire. Initially developed and … END_OF_DOCUMENT_TOKEN_TO_BE_REPLACED

Tetris is one of the most classic of all casual games, so it's nice to see it come to Android smartphones -- but not tablets -- for free courtesy of EA Mobile. Tetris has been published on more than 50 platforms in more than 185 countries, so it's safe to say the free version of Tetris is going to be a hit. The free version of Tetris features new and improved visuals, the famous Tetris music and fan-favorite marathon mode that will challenge even the most seasoned of Tetris veterans. With touch screen controls, … END_OF_DOCUMENT_TOKEN_TO_BE_REPLACED 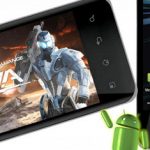 For all the R&D Sony and Nintendo have thrown into the PlayStation Vita and 3DS, respectively, you’d think the mobile-gaming scene was incapable of enjoyment on anything other than a standalone device. Nevermind how the iPhone gave a NOS-like injection to the mobile-gaming landscape. Or how Angry Birds blasted the category to the next level. Or how much marketing has been put into the first PlayStation-certified phone with thumbsticks. Mobile gaming is growing exponentially, and not just because we want to play on the … END_OF_DOCUMENT_TOKEN_TO_BE_REPLACED

Ever wanted to gouge someone with your "fat thumb" while using your cell phone? You just may get that chance, as TNA Wrestling iMPACT! is now available for all iOS devices, Android phones and RIM (BlackBerry) handsets. TNA Wrestling iMPACT! includes more than 24 wrestlers such as Hulk Hogan, AJ Styles, Ric Flair and Kurt Angle, all of whom can be played in the game's Career Mode, Cage Mode, Tag-Team and Submission Mode. In TNA Wrestling iMPACT!, wrestling fans can re-live classic moments through the eyes of classic … END_OF_DOCUMENT_TOKEN_TO_BE_REPLACED

Gameloft, a leading global publisher of digital and social games, has announced it has signed a licensing contract with Universal Partnerships & Licensing to develop and publish the game for the latest installment of the franchise built on speed: “Fast Five.” Historically, “The Fast and the Furious” franchise is the best-selling movie-based and racing franchise in mobile gaming with seven game releases and more than 15 million paid downloads to date. “Fast Five The Movie: Official Game” will be available for mobile … END_OF_DOCUMENT_TOKEN_TO_BE_REPLACED

To celebrate Valentine's Day 13 of Gameloft’s best iPhone and iPod touch games are now at $0.99 only until Valentine's day! But that's not all: you get to choose the 14th game we'll put at $0.99! Vote now for the one you want among all our games and it will be only $0.99 for 24 hours on Valentine's day! Vote here: https://www.facebook.com/gameloft?v=app_180749401962795&ref=ts Already at $0.99 until Valentine's day: Spider-Man: Total Mayhem Shrek Kart Driver Fishing Kings Let’s Golf! 2 Shadow Guardian Rayman 2: … END_OF_DOCUMENT_TOKEN_TO_BE_REPLACED

Sony's PlayStation Portable may not have flown off shelves, but Android devices sure have. So why wouldn't Sony look to incorporate Android in its next handheld system? The company appears to have done just that, announcing today its next-generation handheld, codenamed "NGP." The Sony NGP will make its commercial debut by the end of 2011. The NGP has a ARM Cortex-A9 core (4 core) CPU, dual analogs sticks, a 5-inch OLED display, 3G connectivity (carriers not yet announced), GPS, multi-touch pad, both a front and rear … END_OF_DOCUMENT_TOKEN_TO_BE_REPLACED

GetJar, open app store, receives Millionaire City and MMA Pro Fighter for Android platforms. "Bringing our hugely popular social games to Android made a lot of sense as consumers take to the Android platform in droves," said Jason Loia, COO of Digital Chocolate. "We decided to launch our games on GetJar because of their proven ability to market apps and games to consumers, their understanding of the space and their willingness to work closely with publishers to build awareness of their content." "As Android booms and … END_OF_DOCUMENT_TOKEN_TO_BE_REPLACED