You are here: Home / Archives for 2K Games 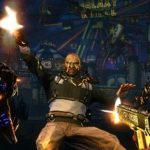 Most people would think a game predicated on using guns and a pair of shoulder-mounted bloodthirsty demon arms would be little more than a gore fest. That would only be telling half the story with The Darkness II, because The Darkness II is the bloodiest, most brutal and hard-edged love story you may ever play. Yes, love story. Based on a series of graphic novels, The Darkness II doesn’t immediately seem rife with romance potential, but it’s appropriate that we’re publishing our review of the game on Valentine’s … END_OF_DOCUMENT_TOKEN_TO_BE_REPLACED

The next chapter in Jackie Estacado's crime-family epic, The Darkness 2, has shipped today for Xbox 360 and PS3. The title will be available internationally on February 10. Inspired by the comic book series created by Top Cow Productions, The Darkness 2 follows Jackie, the head of a New York crime family and wielder of an ancient and brutal force of chaos and destruction known as "the Darkness." Whereas the original The Darkness let players use octopus-like arms as weapons, The Darkness 2 lets them use those arms … END_OF_DOCUMENT_TOKEN_TO_BE_REPLACED

We've known for about a year now that the XCOM series was getting an FPS reboot by 2K Games, and the news left fans of the original games a little cautious. Not to worry, fans: 2K Games has unveiled that a strategy-heavy new version of XCOM, called XCOM: Enemy Unknown, is in development at Firaxis Games and is slated to release this fall for PC, Xbox 360 and PS3. Yes, Firaxis Games -- the same house of strategy experts led by Sid Meier. They know a thing or two about strategy games. Here's the info about XCOM: … END_OF_DOCUMENT_TOKEN_TO_BE_REPLACED

The NBA preseason is toast and the regular season may not be far behind. Good thing 2K Sports has fans' back, releasing NBA 2K12 just in time for basketball fans to avoid getting the shakes. NBA 2K12 is now available at retail for the Xbox 360, PS3 and Wii, plus the requisite less-glamorous systems. In NBA 2K12, fans can take control of 15 hoops icons, including Michael Jordan, Magic Johnson, Larry Bird and Julius Erving in NBA 2K12's all-new NBA's Greatest mode. This is in addition to the normal modern-day players … END_OF_DOCUMENT_TOKEN_TO_BE_REPLACED

The NBA lockout shows no signs of ending anytime soon, so let's re-live those glory days of the past, shall we? Say, the days of Jordan, Bird and Drexler? 2K Sports is gearing up to release NBA 2K12, which will do just that, and to prepare for the full retail game's launch, the company has just posted a free demo of NBA 2K12 on the Xbox Live Marketplace and PlayStation Network. The NBA 2K12 demo allows players to relive this past season's exciting NBA Finals and play one quarter as the Miami Heat or Dallas … END_OF_DOCUMENT_TOKEN_TO_BE_REPLACED 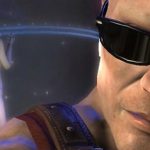 Not many games can say their development cycle reads like a high score, but that’s exactly what 131,400 represents for Duke Nukem Forever: the number of hours it was in development, give or take a few thousand. For more than 15 years, Duke Nukem Forever sat in game-industry purgatory, a title that everyone seemed to want yet no one wanted to complete. A game that blew through almost a half-dozen developers, each leaving its mark on a game that now holds the title of longest development cycle ever. With such a long … END_OF_DOCUMENT_TOKEN_TO_BE_REPLACED

The first we saw of BioShock Infinite at E3 2011 was last night at Sony's press conference, but the video Ken Levine introduced was nothing short of spectacular and worth the wait. During the course of those 90 seconds, there was more in-game footage, more gunplay and more vertigo-inducing vistas than we'd seen in the past several months combined. Irrational Games has kept a pretty tight lid on BioShock Infinite information, which is probably why the sensory overload seemed so euphoric. Well, now we've got that same … END_OF_DOCUMENT_TOKEN_TO_BE_REPLACED

Following the revelation of the XCOM release date for Xbox 360 and PS3, 2K Games released the official E3 2011 Trailer for the sci-fi thriller in development at 2K Marin. In this trailer, you'll get a glimpse of what you can expect when XCOM releases on March 6, 2012. In XCOM, players will lead an elite field team of specialized government agents into battle, combining visceral gunplay with powerful sci-fi abilities. Together, the team will face a vicious and otherworldly enemy conspiring to shatter our world and … END_OF_DOCUMENT_TOKEN_TO_BE_REPLACED

XCOM is making its long-anticipated return next spring, as 2K Games today announced the Xbox 360, PlayStation 3 and PC will all see the updated classic on March 6, 2012. XCOM is a sci-fi tactical action-thriller set in mid-century America. The game will release three days later internationally, on March 9, 2012. XCOM players will lead an elite field team of specialized government agents into battle – combining visceral gunplay with powerful sci-fi abilities. Together, the team will face a vicious and otherworldly … END_OF_DOCUMENT_TOKEN_TO_BE_REPLACED

Darkness 2 fans, the wait for your first glimpse of gameplay video is over. Below is the first gameplay video of The Darkness 2 in all of its, um, 'dark' glory. The video contains in-game gameplay footage while re-introducing the main character, Jackie Estacado, and the Darkness. In addition, the Darkness 2 gameplay video shows the game's signature Quad-Wielding combat system and the unique graphic noir art style that hearkens to The Darkness comics art style by using a hand-painted technique for cross hatching and … END_OF_DOCUMENT_TOKEN_TO_BE_REPLACED