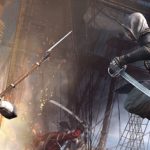 If you're looking for a can't-miss game to drool over while waiting for your Xbox One order to be fulfilled, you'll be pleased to know Ubisoft has begun shipping Assassin's Creed IV Black Flag to retail. You won't be able to play the Xbox One version until Nov. 22, when Microsoft's console ships, but at least you'll know it's waiting for you to fire-up the next-gen system for the first time. Assassin's Creed IV Black Flag was one of the most impressive Xbox One games we saw at E3, which is when we last had the … END_OF_DOCUMENT_TOKEN_TO_BE_REPLACED

Assassin's Creed IV Black Flag is one of the most-anticipated games set to release for the Xbox One and PS4, an impressive feat for a non-exclusive title. Ubisoft has made some incredible strides in the "next gen" console race, and Black Flag shows how. Today, Ubisoft released a new Assassin's Creed IV Black Flag video called "Next Gen Open World" to showcase just how massive the game will be. Rockstar's Grand Theft Auto V (GTA V) may garner most of the attention among open-world games this fall, but Assassin's Creed … END_OF_DOCUMENT_TOKEN_TO_BE_REPLACED