You are here: Home / Archives for beta 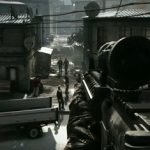 If you haven't had a chance to attend E3 or PAX, you'll soon get your chance to be hands-on with Battlefield 4. EA has announced that the Battlefield 4 beta starts on Oct. 1 for Xbox 360, PS3 and PC. By all accounts, the Battlefield 4 beta will be open to just about anyone, although there are sure to be some quantity limitations. It's unclear, however, this this version of the beta compares to the "exclusive" Battlefield 4 beta that was previously announced for special BF players. That beta program involved … END_OF_DOCUMENT_TOKEN_TO_BE_REPLACED

Activision took the day before E3 2011 kicks off to announce that the invitation-only public beta for Call of Duty Elite is expected to begin July 14 this year. While the full capabilities of the service will not be on display until the launch of Modern Warfare 3, the beta will give users a taste of the experience and allow the service to be tested by gamers currently playing Call of Duty: Black Ops multiplayer. In its five days since announcement, the Call of Duty Elite beta has already surpassed more than 1 million … END_OF_DOCUMENT_TOKEN_TO_BE_REPLACED