You are here: Home / Archives for Bethesda 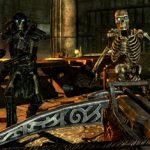 More than a year after the release of Skyrim, the game is still going strong, and it's one of my favorite games. One of the ways Bethesda is keeping Skyrim fresh is through a batch of DLC, which has recently taken the form of Hearthfire and Dawnguard. I've prepared short reviews of both in anticipation that people will be interested in hearing about each of them. This is my Dawnguard DLC review; the Hearthfire review is located here. Dawnguard is much more substantial add-on than Hearthfire, adding on a full … END_OF_DOCUMENT_TOKEN_TO_BE_REPLACED 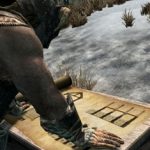 More than a year after the release of Skyrim, the game is still going strong. It’s one of my favorite games at any rate. So, of course I gladly accept an excuse to stay up until the wee hours of the morning being the Dovahkiin. Initially, I played Skyrim on the PS3, including all the bugs that came with it, and waited patiently for the DLC to be released for my console. Well, I got impatient, and purchased a second copy of Skyrim for my Xbox 360 and immediately downloaded the DLC. Because Hearthfire and Dawnguard are … END_OF_DOCUMENT_TOKEN_TO_BE_REPLACED

Bethesda's new game Dishonored, a first-person game that includes some Deus Ex-like elements, is getting three new DLC add-on packs for Xbox 360, PS3 and PC. One will release in December, while the other two come in 2013. All Dishonored DLC will release at the same time on all three platforms; there will be no timed exclusivity. Dishonored: Dunwall City Trials, being released in December for $4.99 (or 400 Microsoft Points), will include 10 challenge maps that will test and track your combat, stealth and mobility … END_OF_DOCUMENT_TOKEN_TO_BE_REPLACED

id Software and Bethesda today released some news that'll be a BFD to certain FPS fans: the release date for DOOM 3 BFG Edition. DOOM 3 BFD Edition includes DOOM 3, its expansion packs, and the original DOOM and DOOM 2 games. This entire package, called DOOM 3 BFG, is slated to release in North America on October 16 and in Europe on October 19. All told, DOOM 3 BFG Edition features re-mastered versions of both DOOM 3 and the Resurrection of Evil DLC, as well seven new levels of content called "The Lost Mission." … END_OF_DOCUMENT_TOKEN_TO_BE_REPLACED

The DOOM series will finally appear on the PlayStation 3, Bethesda Softworks has announced, as "DOOM 3 BFG Edition" is currently in development and will ship this fall for the PS3, Xbox 360 and Windows PC. The game will include DOOM 3 and the Resurrection of Evil add-on pack, both of which have been completely re-mastered for this special release. The package also includes seven new levels entitled "The Lost Mission." Re-mastered for Xbox 360 and PS3, Doom 3 BFG Edition offers "greatly enhanced graphics," according … END_OF_DOCUMENT_TOKEN_TO_BE_REPLACED

One of the games we'll see at E3 next week, Bethesda Softworks' Dishonored, now has an official release date: October 9. Dishonored is a supernatural assassin action game being developed by development at Arkane Studios and slated for release on the Xbox 360, PS3 and PC. The game will ship in Europe three days later. Dishonored is set in Dunwall, an industrial whaling city where steampunk- inspired technology and otherworldly forces coexist in the shadows. You are Corvo, the once-trusted bodyguard of the beloved … END_OF_DOCUMENT_TOKEN_TO_BE_REPLACED

Yesterday we reported that Bethesda is working on The Elder Scrolls Online, an MMO that marks the first time Elder Scrolls fans will be able to play in the franchise's fantasy open-world sandbox with friends. Today, we've got the first The Elder Scrolls Online video trailer for your viewing pleasure. This announcement trailer is the first official video in a series of what promises to be many assets about the MMO leading up to, during and beyond E3 next month. We'll have additional information as it becomes … END_OF_DOCUMENT_TOKEN_TO_BE_REPLACED

The best game of 2011, The Elder Scrolls V: Skyrim, is getting even better for user-created content fans, as Bethesda today announced that the Skyrim Creation Kit and High-Resolution Texture Pack are now both available for Windows PC via Steam. Both the Creation Kit and High-Resolution Texture Pack are free. With the Skyrim Creation Kit, fans can upload, download and install custom content through the Skyrim Workshop on Steam, making sharing mods easier than ever before. You can access the Skyrim Workshop via … END_OF_DOCUMENT_TOKEN_TO_BE_REPLACED

A new demo for RAGE, the latest game from id Software, is now available on Xbox Live. The PlayStation 3 demo will be available via PSN starting Dec. 6. Along with the demo announcement, Bethesda also announced that RAGE will be available for a special Black Friday sale price of $29.99 at GameStop and select retailers. The RAGE demo lets players experience life in the wastelands as visualized by id Software's engineers. In the game, the Ghost Clan, a cult of murderous fanatics, has infiltrated the waterworks beneath … END_OF_DOCUMENT_TOKEN_TO_BE_REPLACED