You are here: Home / Archives for Borderlands 3 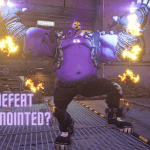 Billy, The Anointed is one of the bosses you will encounter while playing Borderlands 3. The battle against the boss will happen towards the last moments of the mission Lair of the Harpy. He is one of the hardest to defeat goliaths you'll fight in the game. The fight takes place inside the manor theatre during visiting Jacob’s Estate. Billy is much more powerful than other goliaths of the game. He has more health, can deal more damage, and has added abilities like teleporting that make him too hard to win against. … END_OF_DOCUMENT_TOKEN_TO_BE_REPLACED