You are here: Home / Archives for Bulletstorm 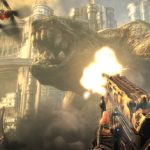 First impressions of a game have a tendency to stick around, and they’re sometimes dead-on with a final impression even months later. After spending the past week with Bulletstorm, the latest shooter from People Can Fly and Epic Games, I'm not that far from what I initially thought of the game. When it was first shown to the adoring public, my thoughts leaned towards a Borderlands knock off that came with a very pedestrian and frat boy mentality. Admittedly, the Borderlands comparison was way off and was there … END_OF_DOCUMENT_TOKEN_TO_BE_REPLACED