You are here: Home / Archives for Complete guide to league of legends 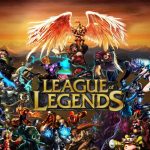 Intro Played by more than 100 million active users per month, League of Legends is one of the most popular esports in the world. More often than not, the game is simply referred to as League or LoL by fans, and while it’s extensively loved, the reality is, it’s a rather intricate game. Having a reputation as being notoriously impenetrable to watch LoL for the newbie viewers as well as those who don't play it. Luckily there exists a guide like this, which is an attempt to hopefully help you – the curious viewer, … END_OF_DOCUMENT_TOKEN_TO_BE_REPLACED