You are here: Home / Archives for Darksiders 2 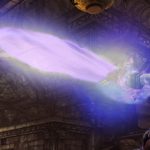 In this era of excessive gore, you’d think a game with one of the Four Horsemen of the Apocalypse would be rife with blood, guts and violence. The original Darksiders game proved that hypothesis wrong, with a mature tone but decidedly more adventure- than action-oriented experience. For Darksiders 2, THQ and Vigil Games hope to up the ante in every possible way, a goal made possible in part by switching from the protagonist War to his brother, Death. The change means much more than a new veneer and name; after spending … END_OF_DOCUMENT_TOKEN_TO_BE_REPLACED