You are here: Home / Archives for FPS

Every week, there is a legendary Destiny player who makes his appearance in the world. He comes into the game for one purpose, and one purpose only: to wreak havoc and destruction by creating a Black Friday-esque swath of chaos. His name? Xur. The Beginning of the End With this latest update in the world of Destiny, it is quite hard to keep from rushing over and buying the game. How he (or she) operates is this. Xur arrives in the world once every week, and sells a rare weapon for a cutthroat price. As you may very … END_OF_DOCUMENT_TOKEN_TO_BE_REPLACED

The next-gen conversations may now be quite alive, but their first-person shooter ranks have just gone decidedly (un)dead. Techland and Warner Bros. Interactive today took the wraps off of Dying Light, a first-person survival-horror game with a portentous day-night cycle set in an open world. Dying Light, an action-oriented rather than slow-moving-zombie type game, is currently slated to release in 2014 for Xbox One, PlayStation 4 (PS4), Xbox 360, PS3 and PC. During the day, players will traverse an expansive urban … END_OF_DOCUMENT_TOKEN_TO_BE_REPLACED

Indie studios Animantz and Dysotek today announced the upcoming release of Deadly Walkers, a zombie-themed first-person shooter, for Mac and Windows. Deadly Walkers borrows its atmosphere from the feel of the old zombie movies, with players fighting against hordes of undead creatures that slowly surround them. Using fire weapons, players can mutilate and injure the zombies' bodies, but only shooting their heads will kill them. Through the eyes of a special forces soldier, the game tells the story of an apocalyptic … END_OF_DOCUMENT_TOKEN_TO_BE_REPLACED

I’m going to give you two options when reading this review: enjoy the world’s shortest, or stay tuned for an explanation. First, the short version: “buy this now.” With Call of Duty: Black Ops 2, Treyarch and Activision have unleashed not only the best game in the COD series, but the best shooter of 2012. The stakes were high this fall, with several juggernaut sequels releasing at about the same time, but Black Ops 2 is both transformational for the franchise and undeniably excellent at a time when many shooters are … END_OF_DOCUMENT_TOKEN_TO_BE_REPLACED

The first first-person shooter on a handheld system has shipped today, and it has the capabilities of the PlayStation Vita to thank for it. Called Resistance: Burning Skies, the portable FPS marks the official debut of the "Resistance" PS3 franchise on Sony's new portable gaming system. Chronicling the initial days of the brutal Chimeran alien invasion along the United States' eastern seaboard, Resistance: Burning Skies uses both analog sticks for precision shooting and navigation, while it uses the front and rear … END_OF_DOCUMENT_TOKEN_TO_BE_REPLACED 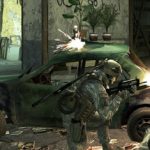 As one of the most revered first-person franchises around, the Call of Duty series has a reputation to uphold. Naturally you know it’s safe to expect high production values, particularly with the Infinity Ward-developed entries like Modern Warfare 3, but you also know not to expect Activision to rock the boat. After all, why change a franchise that’s set multiple all-time sales records? I certainly won’t argue with that logic; making money is why developers and publishers release games in the first place. But as a … END_OF_DOCUMENT_TOKEN_TO_BE_REPLACED 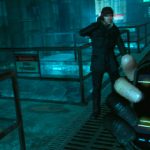 The original Goldeneye 007 catapulted the first-person-shooter genre to the stratospheric status it enjoys today. The franchise was good and the N64 graphics were solid, but it was the gameplay --especially multiplayer -- that won gamers’ hearts. With Goldeneye 007: Reloaded, Activision hoped to capture lightning in a bottle and bring the franchise to a new generation of gamers. The result is a mix of old and new experiences that delivers some fun but can’t completely keep up with the outstanding FPSes modern gamers … END_OF_DOCUMENT_TOKEN_TO_BE_REPLACED

A new arcade-style first-person-shooter has just launched on Xbox Live Arcade, but it's not the type of FPS most gamers might expect to see during the mad rush of holiday releases. Called Xotic, the game has players build their scores by maintaining a chain reaction of points and power-ups. Xotic costs 800 Microsoft Points, mimicking the $9.99 price of the Windows PC version that's been available since September. Xotic is a vibrant arcade-style FPS with unique chain-reaction gameplay and point multiplier mechanics … END_OF_DOCUMENT_TOKEN_TO_BE_REPLACED

N64 fans, we hope you've got an Xbox 360 or PS3, because the best game on N64, GoldenEye, has shipped today under the guise of GoldenEye 007: Reloaded, an FPS with full HD graphics and online multiplayer options. GoldenEye 007: Reloaded is a modern re-telling of the legendary GoldenEye film. The game was built on a new game engine that delivers the action of Daniel Craig's James Bond at 60 frames per second with fully HD visuals and the ability to play using the PlayStation Move sharp shooter. Based on the … END_OF_DOCUMENT_TOKEN_TO_BE_REPLACED

If you pick Nintendo out of one of the big three, hardcore first-person shooters are not usually the first genre that comes to mind. Luckily, with the upcoming release of the Wii U, gamers will have a few hardcore FPSes ready for you. Ubisoft made an appearance at the Nintendo press conference at E3 this week, giving us a few titles to be anxious for. We know that Assassin's Creed, Rabbids and Tom Clancy's Ghost Recon Online will be heading exclusively to the Nintendo Wii U. Although we've not gotten our hands on … END_OF_DOCUMENT_TOKEN_TO_BE_REPLACED