You are here: Home / Archives for Free to play 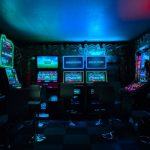 The gaming industry has evolved considerably since it first launched, and gamers have seen many changes that have transformed the face of the industry forever. One great example of this was the introduction of online gaming, which took multiplayer gameplay to another level. In the past, playing with friends was limited to split-screen play but online gaming made it so that friends could play with each other no matter where they were. This same remote aspect is present in other industries, such as gambling thanks to the … END_OF_DOCUMENT_TOKEN_TO_BE_REPLACED