You are here: Home / Archives for G-Force 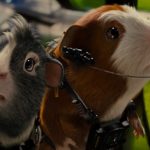 Superhero guinea pigs doesn’t sound like the most intriguing movie, let alone something readers would want to learn more about, so the first time G-Force released on Blu-ray I skipped it entirely. But there Disney went, releasing G-Force on Blu-ray 3D, and suddenly my review ears perked up. “Hmm, it mustn’t be half bad, if it’s getting the Blu-ray 3D treatment,” I thought. Still...superhero guinea pigs? I wasn’t sold. Now that I’ve watched G-Force in 3D, though, I’m pleased to say that it presents some interesting 3D … END_OF_DOCUMENT_TOKEN_TO_BE_REPLACED