You are here: Home / Archives for Ghosts of the Abyss 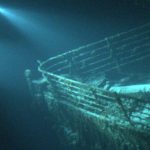 Apparently James Cameron’s first love is water. With The Abyss and Titanic already under his belt already, supposedly Avatar 2 is headed for an underwater environment as well. Fortunately, Cameron’s second love is investing the money he’s made from those (and other) movies right back into his aqueous hobby, as evidenced with Ghosts of the Abyss, which Disney recently released on Blu-ray 3D and Blu-ray. A documentary of the Titanic itself, Ghosts of the Abyss marks the first time Cameron traveled back to the ill-fated … END_OF_DOCUMENT_TOKEN_TO_BE_REPLACED