You are here: Home / Archives for John Carter 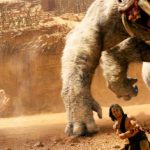 I didn’t get a chance to see John Carter in the theaters, but by box-office accounts, I wasn’t the only one. Panned for multiple reasons, Disney’s John Carter left theaters pretty quickly -- to the point that one of Disney’s highest executives resigned -- and then promptly released on Blu-ray 3D. Curious rubberneckers suddenly had the chance to watch John Carter for themselves, without fear of being seen by friends, to either look at the trainwreck or question what all the trashing was for. Having watched John Carter on … END_OF_DOCUMENT_TOKEN_TO_BE_REPLACED