You are here: Home / Archives for Jumanji movie review 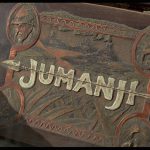 Jumanji Anniversary Edition starring Robin Williams is a remake of the super hit Jumanji (1995). The original version showed a board game where the animal characters in the game become real. The anniversary edition is also on similar lines where two kids let loose this board game and are exposed to animals and other dangers. In order to bring everything to normal, it was important for the players to finish the game. Two kids (Dunst and Bradley), bored on a wet afternoon, discover an ancient board game and being to … END_OF_DOCUMENT_TOKEN_TO_BE_REPLACED