You are here: Home / Archives for Kinect Sports 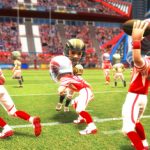 I am apparently old and fat. Kinect Sports Season 2 throws another six motion-controlled sports at Xbox 360 owners, asking them to once again use their body as the controller. Either my controller needs new batteries, or I play everything from tennis to darts entirely incorrectly. I scoffed at the notion of Kinect Sports Season 2 tracking calories during each play session and each sport mini-game, but after feeling every motion-controlled move for 36 hours afterward, I think the calorie counter was a way to point out … END_OF_DOCUMENT_TOKEN_TO_BE_REPLACED