You are here: Home / Archives for Mass Effect 3

It's not even the end of Q1 yet, and one of 2012's most anticipated games has shipped to retail: Mass Effect 3 has landed in North American stores for Xbox 360, PS3 and Windows PC. As we said in our hands-on preview, Mass Effect 3 for Xbox 360 supports voice commands via the Xbox Kinect hardware. It's the only platform to support voice controls. The first round of Mass Effect 3 DLC has also gone live today. Mass Effect 3 will launch in Europe on March 9. Mass Effect 3 thrusts players into an all-out galactic war … END_OF_DOCUMENT_TOKEN_TO_BE_REPLACED

From the "what the hell?" desk today comes word that EA is sending copies of Mass Effect 3 into space -- literally -- as a sort of interplanetary space hunt. Whoever finds the game when it hits Earth again will win a full retail version of the game before it hits retail. The promotion has got to be the first of its kind in the game industry, and the whole program seems a bit forced, but we'll let EA's announcement speak for itself: Starting on February 23 (today), EA and BioWare will be making history by launching … END_OF_DOCUMENT_TOKEN_TO_BE_REPLACED

The Mass Effect 3 demo we mentioned in our Mass Effect 3 voice commands preview is finally here, and it's available on three different platforms: Xbox 360, PS3 and Windows PC. The Xbox 360 version is the only one featuring voice commands, but other than that, all three demos are identical. Oh, and they all include a taste of the multiplayer component. Yep, we thought that'd get your interest. Mass Effect 3 is one of the most anticipated games of 2012, blending combat, customization cinematic storytelling and action … END_OF_DOCUMENT_TOKEN_TO_BE_REPLACED 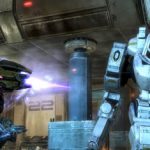 Mass Effect 3 is one of the most-anticipated games on most gamers’ 2012 radar, the thrilling conclusion to one of the most epic trilogies in the industry. This Tuesday (Feb. 14), Xbox 360 and PS3 owners will finally have a chance to get their hands on Mass Effect 3 via a new demo, with Xbox 360 owners getting a particularly special treat if they have the Kinect hardware. The Mass Effect 3 Xbox 360 demo includes voice-command features, much like the full Xbox 360 version will have when it ships March 6 (the PS3 version … END_OF_DOCUMENT_TOKEN_TO_BE_REPLACED

To say Mass Effect 3 is going to be big, or is highly anticipated, or will make BioWare a truckload of cash, would all be disservices to the world of understatements. The RPG heavyweights are creating the final chapter in a game that could very well see the destruction of Earth by robots, for crying out loud. So yeah, when they release a video trailer called "Fall of Earth," you'd better believe people are going to pay attention. Like us. And you. And anyone else you want to send this video to, because it really does … END_OF_DOCUMENT_TOKEN_TO_BE_REPLACED

Mass Effect 3, the final game in BioWare's epic space-based trilogy, will land at retailer on March 6, 2012, EA announced today at its E3 2011 press conference. In Mass Effect 3, an ancient alien race known as Reapers has launched an all-out invasion of the galaxy, leaving nothing but a trail of destruction in their wake. Earth has been taken, the galaxy is on the verge of total annihilation, and the player is the only one who can lead a team to stop them. The price of failure is nothing less than extinction. As … END_OF_DOCUMENT_TOKEN_TO_BE_REPLACED