You are here: Home / Archives for Mobiles released in 2017 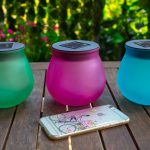 The History of the Telephone The very first instance of a device used to transmit sounds over an extended wire was the string telephone, created in 1667 by a man called Robert Hooke. There is some speculation as to who was ultimately responsible for the invention of the modern-day telephone however, Alexander Graham Bell was the first to patent its design, hence his name is most often associated with the invention of the telephone. From those rudimentary devices, to the vast selection of technical genius and … END_OF_DOCUMENT_TOKEN_TO_BE_REPLACED