You are here: Home / Archives for Monster Hunter World 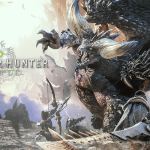 Monster Hunter World is a popular gaming franchise mainly due to its exhilarating monster combats. It has been the home to an equally exciting community of players all over the world for almost 3 years now. And its well-crafted weaponry plays a huge part in its success. So, it’s about time that we throw some light on the Monster Hunter World weapons tier list. In this blog, we present to you the best to worst weapons to be used in both multiplayer and solo play modes. Monster Hunter World Weapon Tier List For … END_OF_DOCUMENT_TOKEN_TO_BE_REPLACED