You are here: Home / Archives for Spider-Man 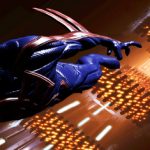 Developer Beenox produced what I felt was a fairly well thought out and received Spider-Man title with Shattered Dimensions, so when Edge of Time was introduced and revealed to have only two versions of Spider-Man in it, I thought that things could’ve been tightened up and the gameplay solidified a little. My thoughts were still along this track when I started playing Edge of Time, but then that line was quickly derailed. The story revolves around Miguel O’Hara (Spider-man 2099) who while spying on an evil scientist, … END_OF_DOCUMENT_TOKEN_TO_BE_REPLACED