You are here: Home / Archives for Summit Entertainment 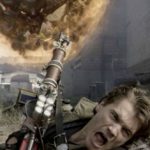 Moscow and alien invasions are two of the most imposing situations an action movie can present, so surely an alien invasion in Moscow sets the stage for the best movie of all time. Such is the premise -- and goal -- of The Darkest Hour, which recently released on Blu-ray Disc. The premise aspires to even more buzz, though, when you consider that the plot hinges on five young people whose now-solitary goal is to save humanity, with two of them forced to abandon fundraising for their social media company. I mean really, … END_OF_DOCUMENT_TOKEN_TO_BE_REPLACED