You are here: Home / Archives for Superhero video games 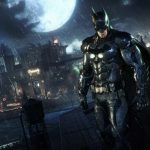 The superhero genre in video games has always been a bit tricky and unpredictable in terms of the kinds of games the industry has received. There aren’t many good superhero games that I can remember playing as many of them are just plain mediocre and forgettable. Most of the games that we’ve seen surface the market and into the store were the ones made along with the release of their movie counterparts.  Pick any of them, and you’ll realize that you aren’t playing a polished video game but just an extended, … END_OF_DOCUMENT_TOKEN_TO_BE_REPLACED