You are here: Home / Archives for Back to the Future 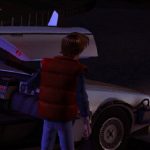 Back to the Future was a distinct movie trilogy, one with action, comedy, an interesting concept and an uncanny ability to poke fun at itself while still being serious enough to build a cult following. The combination of time-traveling cars and a rabid fanbase seemed like great justification for a series-based resurgence, so Telltale Games created Back to the Future: The Game, which originally released as an episodic series on PC. The episodes -- which feature the voice talents of Christopher Lloyd (Doc Brown) and the … END_OF_DOCUMENT_TOKEN_TO_BE_REPLACED