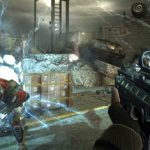 When the first F.E.A.R. burst onto the PC-gaming scene, people were blown away by its graphics and enemy AI, leaving its psychological horror elements as a tasty icing. Since that time, the franchise has continued to lean on its graphics and AI, opting to change things up mostly through the narrative. Over the course of a sequel and some add-ons, the franchise has expanded by retelling the story from a few different vantage points, which in in F.E.A.R. 3 now includes the perspective of Alma’s two sons, Point Man and … END_OF_DOCUMENT_TOKEN_TO_BE_REPLACED