You are here: Home / Archives for Rayman 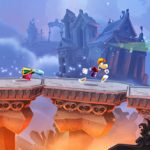 Today, Ubisoft announced Rayman Legends for Wii U, Xbox 360 and PS3, a game that's getting fantastic early reviews. The Rayman series has long been a fan favorite, but this latest outing seems to be tickling the fancy of even people who aren't as familiar with the franchise. The game currently has a Metacritic aggregate score of 90 on the Wii U, making it the highest rated Wii U title to date. That pretty much means that if you own Nintendo's next-gen console, you should probably stop reading right now and go buy … END_OF_DOCUMENT_TOKEN_TO_BE_REPLACED

There's a new Rayman game on the way this holiday, and the initial overview makes it sound like Rayman Origins will be the best Rayman game yet. Michel Ancel, the original creator of Rayman and the outstanding Beyond Good & Evil, is creating the new game as a high-definition, 2D side-scrolling platforming adventure with four-player drop in/drop out co-op. The game will ship this holiday for Xbox 360, PlayStation 3 and Nintendo Wii. It was not immediately clear whether Rayman Origins will be a stand-alone retail SKU … END_OF_DOCUMENT_TOKEN_TO_BE_REPLACED