You are here: Home / Archives for soccer legend poki games 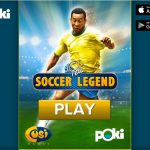 The award-winning sports game, Pelé: Soccer Legend, is now accessible to all on the web Amsterdam, The Netherlands • November 25, 2016 | International, cross-platform Poki Publishing and mobile studio Cosi Games have joined forces to release Pelé: Soccer Legend on the web. Already a widespread success in the mobile realm, Pelé: Soccer Legend lets gamers play as the Brazilian soccer superstar. The game’s substantial career mode starts on the streets of Brazil, where players will learn Pelé’s best moves during the … END_OF_DOCUMENT_TOKEN_TO_BE_REPLACED