You are here: Home / Archives for Watch Dogs 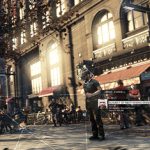 When Watch Dogs races onto the Xbox One and PS4 this fall, it may have NASCAR driver Brad Keselowski to thank for it. Keselowski, one of only two NASCAR drivers to have won a championship in both the Sprint Cup Series and the Nationwide Series, will appear in Watch Dogs as a non-playable character. A professional stock car driver and team owner, Keselowski will be featured as one of the many in-game citizens roaming the streets of Chicago. Players will be able to profile the NASCAR driver as they will with any other … END_OF_DOCUMENT_TOKEN_TO_BE_REPLACED

After bringing back PS4 bundles just last week, Amazon is beginning to sell out of what is presumably their final PS4 launch date inventory. Of the four PS4 launch date bundles Amazon brought back for pre-orders, the Watch Dogs bundle is now listed as sold out, with the message for would-be buyers to "Sign up to be notified when this item becomes available." As of press time, the other three bundles all remain shown as available for pre-order. How long that will remain true is uncertain. So, if you're one of the few … END_OF_DOCUMENT_TOKEN_TO_BE_REPLACED

Gamers' opportunity to get a PlayStation 4 on the actual PS4 release date has opened up for a brief window, as Amazon has just begun selling a new batch of PS4 launch day bundles. The PS4 bundles on Amazon are identical to the units previously available. Just two weeks ago, Amazon's allotment of PS4 release date inventory was completely sold out. As was the case previously, the stand-alone PS4 launch day console is unavailable for pre-order, as those allotments sold out during E3. That means that, short of standing … END_OF_DOCUMENT_TOKEN_TO_BE_REPLACED

Ubisoft today announced pre-order bonuses for Amazon.com and GameStop, with the Amazon pre-order bonus actually being an exclusive (and entire) single-player mission. Watch Dogs is a PlayStation 4 (PS4) launch title, presumably will be a launch title for the next Xbox, and will also ship for PS3, Xbox 360 and Wii U. You can click here to pre-order Watch Dogs from Amazon. Watch Dogs will be available in North America on November 19 for the current-gen consoles and Wii U. For pre-orders on Amazon, players will … END_OF_DOCUMENT_TOKEN_TO_BE_REPLACED

We now know the release date for Watch_Dogs (or "Watch Dogs" for those who don't like fancy naming conventions), as well as its development status for the "Xbox 720." The game's availability for the PlayStation 4 (PS4) was already known, as the game made its debut at Sony's PS4 unveiling event. Watch_Dogs will be available in North America on November 19 for Xbox 360, PS3, Wii U and PC. Ubisoft didn't specify a specific date for its PS4 launch, just that it would be available "at the launch of the PlayStation 4." The … END_OF_DOCUMENT_TOKEN_TO_BE_REPLACED