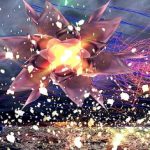 Much like the game that inspired it (Rez), Child of Eden is a game that defies definition. Is it a shooter or is it a screensaver? Is it a rhythm game or is it an on rails shooter? Regardless of how the game is defined, it easily has become one of, if not the reason to own a Kinect system in my opinion. Sure it lacks the child friendly and forgiving qualities of Kinectimils, and it's not quite as generation linking as the upcoming Once Upon a Monster, but this is a game that can and should be used to show off what the … END_OF_DOCUMENT_TOKEN_TO_BE_REPLACED

One of the biggest "family friendly" surprises of E3 2011 was the unveiling of Kinect Disneyland Adventures, a Xbox 360-exclusive title that lets kids (of all ages) walk through a fully realized digital version of Disneyland while interacting with characters and the environment. Using nothing but the Xbox Kinect, players can meander down Main Street USA, frolic through Frontierland or tiptoe through Tomorrowland to see -- and then play mini-games inspired by -- their favorite Disneyland attractions. Our Executive … END_OF_DOCUMENT_TOKEN_TO_BE_REPLACED

We've been fans of the Fable series since Peter Molyneux first debuted the franchise, and we've covered them quite a bit in our Fable 2 Demon Doors and Fable 3 Demon Doors walkthroughs. The next chapter in the series, Fable: The Journey, marks a serious departure for the game, largely because of its use of the Xbox Kinect. By using the Kinect's motion controls, Fable: The Journey at this point is a largely on-rails experience -- as were many Kinect games at E3, to be honest. The gameplay demo we saw at E3 showed the … END_OF_DOCUMENT_TOKEN_TO_BE_REPLACED

Ever since the release for the Xbox Kinect, a similar problem has been an issue to most people who plan on owning this Xbox 360 add-on: gameplay space. The amount of actual space needed to use the Xbox Kinect is great when you have the amount to use, but it can be very unrealistic to many people. At least six feet is needed to start playing a Kinect game, which may require you to move some furniture around. If you plan to play with another person, an additional two feet is required, making this minimum space requirement … END_OF_DOCUMENT_TOKEN_TO_BE_REPLACED

Mass Effect 3, the final game in BioWare's epic space-based trilogy, will land at retailer on March 6, 2012, EA announced today at its E3 2011 press conference. In Mass Effect 3, an ancient alien race known as Reapers has launched an all-out invasion of the galaxy, leaving nothing but a trail of destruction in their wake. Earth has been taken, the galaxy is on the verge of total annihilation, and the player is the only one who can lead a team to stop them. The price of failure is nothing less than extinction. As … END_OF_DOCUMENT_TOKEN_TO_BE_REPLACED

The iPhone hit Fruit Ninja is coming to Xbox Kinect this summer, giving casual gamers a chance to slice and dice their favorite fruits in high definition. Fruit Ninja Kinect isn't a port, but an all-new console iteration of the hit mobile game. Fruit Ninja Kinect will be featured as part of Microsoft's Summer of Arcade promotion and available via download from Xbox Live Arcade. The Xbox 360-exclusive game is scheduled to release sometime during the late summer. Fruit Ninja Kinect takes all the frenzied fruit … END_OF_DOCUMENT_TOKEN_TO_BE_REPLACED

Just hours before Microsoft's E3 2001 press conference, a handful of new Kinect games have been leaked into the wild, including the ultimate game for any fan of Disneyland (like me!): Kinect Disneyland Adventures. Kinect Disneyland Adventures essentially re-creates a visit to the Magic Kingdom, with players able to meander down Main Street, take a trip through Tomorrowland and frolic through Frontierland, all while meeting their favorite Disney characters. Virtually, of course. According to an article on USA … END_OF_DOCUMENT_TOKEN_TO_BE_REPLACED

Today's news of an Xbox Kinect-exclusive wrestling game featuring Hulk Hogan is tempered somewhat by the recent passing of Randy Macho Man Savage, but in a way Majesco's timing for unveiling the game is a great tribute to the man once pegged as both Hulk Hogan's friend and foe. Hulk Hogan's Main Event will be the first performance-based wrestling game on Kinect for Xbox 360 that lets players train with mentor Hulk Hogan as they build their own wrestling personalities and learn the art of showmanship to win over the … END_OF_DOCUMENT_TOKEN_TO_BE_REPLACED

Wii Sports may have been the most popular Wii game out of necessity, but Kinect Sports has remained a good seller on Xbox 360 because people just love their gesture-based sporting games with Kinect. The latest DLC for Kinect Sports, Calorie Challenge, ups the ante by tasking players with activities geared not toward entertainment, but burning calories. Yes, the Kinect has yet another health-improving game on its hands, this time via a new downloadable content pack. The Kinect Sports: Calorie Challenge DLC features a … END_OF_DOCUMENT_TOKEN_TO_BE_REPLACED